This one time I had cancer. There was a particular part of my body that was being attacked. My M.O. as regards my own health, especially at the time, was usually to let things run their course. I would usually try to eat more or less healthily, I worked out occasionally. I preferred to avoid medications and vitamins and surgery of any kind was out of the question. When I found out I had cancer in one specific body part, I could have said, “All body parts matter. Why should my arm or my mouth or my gut or, God forbid, my head, have to do something different or have a less convenient experience just because that one part is having some trouble right now? It’s not my fault that there’s cancer in there.” (Even if maybe it was. Even if maybe it was and I didn’t know it.) The thing is, if I had said those things, and done nothing, the whole rest of my body would have been compromised. I’m pretty sure I would have died.

So instead, I went and had surgery to remove the cancer (not the body part), and had radiation, and took medication, and thank God didn’t end up needing chemo. And now, I still have to deal with the occasional migraine (they’re horrible, but I don’t believe they’re going to kill me), but I have been cancer free for twelve years. It took incisive, decisive action and then prolonged focus on that one body part to rid it of the disease. I had to introduce new practices to maintain my health; now I eat better (mostly!) and work out every week day, and try to take a day of rest each week. Yes, there are still scars, and yes, sometimes the other body parts (mostly my head) feel twinges of the fact that that evil was there. But the evil itself is gone and I, in my body, can rejoice in that.

[I was going to let this analogy stand alone and let The Internet figure it out, but it occurs to me that sometimes The Internet needs things spelled out, so let me just remind it that no analogy has a 100% point-by-point application to what it is analogizing. Specifically:

In the Bible, the Apostle Paul wrote a letter to a church in the city of Corinth. That church was having a tough time with unity–both theologically and across sociodemographic lines. So Paul said, “Hey guys, Jesus is still here but His body is now us, and just like a body has all these different parts, we all have different roles to play–in conjunction with each other. We’re not going to do everything the same as each other–and it would be bad if we did because, you know, then we wouldn’t be a body. We’d just be random body parts (or one giant body part) lying around trying to do our own thing and that would be stupid.” (He didn’t say it quite like that–you can read a more accurate version here and consider this one the Pilgrimage Paraphrase Edition.)

In that passage, he also said (and this is a direct quote from the New International Version),

And, here’s the kicker:

In my previous post, I mentioned some opposite reactions to my portrayal in a recent sermon of the killing of George Floyd.

But there was another reaction I encountered before those. One of my close friends, who also follows Jesus, posted a questioning critique, wondering why it seemed to take reports about George Floyd’s Christian faith to get some white Christians finally vocal about fighting racism. Did this imply, he wondered, that the only reason this specific Black life (and death) mattered to them was that Floyd was a Christian? The implication being, of course, that therefore all the other Black lives and deaths didn’t?

My friend wasn’t directing his question at me, but I “felt” the critique anyway, because for a few moments that week, I had to ask that very question of myself. It’s true, I “snapped” before Floyd’s murder, but finding out he was known for his faith and his work toward peace in his neighborhood did do something in my spirit and (although you clearly can’t tell from this blog) fired me up in a new and different way than I had been fired up before.

I strongly believe that for a follower of Jesus, the primary human identifier and loyalty must be to Jesus, and from there to other followers of Jesus, regardless of ethnicity, skin color, or nationality (or denomination, but that’s a totally different blogpost). Not so that we can form our own new kind of “supremacy” based on religion or something (quite the opposite, in fact), but because we are intended, as the Apostle Paul described it, to be one Body–an expression of Jesus Christ’s own body here on earth, since He in His literal one is currently seated at the right hand of the Father in glory, waiting (until some as yet unknown-to-us moment) to return. It’s really hard to subsume all one’s other “identities” under the Christ-following one, but I do think that is what a follower of Jesus is meant to do, ultimately, and I do believe there are people who have done it to some degree or other.

Which means that after the first horrific photos hit my feeds, after the gut-sink and the numb “Not again, still?”, when news came out about how Floyd was a man of peace who assisted baptisms in the projects, the whole thing became personal. I am sure many of the similarly murdered people who more of us are now naming and recognizing, were also my family in Christ, and their deaths have saddened and even angered me, but I didn’t know and therefore connect with their stories the way I did with George Floyd’s after reading specific snippets about him. 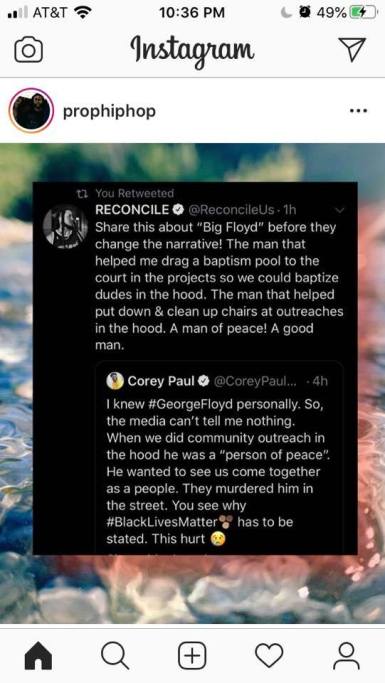 The one thing that I admit to finding unhelpful about the phrase “Black Lives Matter” is that it continues to provide an “out” for people of different skin tones not to identify as belonging to each other. (I still affirm the phrase as fulfilling other important purposes.) It was in the moment when I realized that George Floyd was not just a Black man who mattered (and he is that) but my family because of the blood of our mutual, unjustly murdered Lord Jesus Christ, that the light came on and my sometimes-migraine-afflicted brain said, “If one part of the Body suffers, the whole Body suffers with it!” And so, I guess I don’t think my (or other white Christians’) finding Floyd’s faith compelling and finding commonality with him in it lessens the validity of our suddenly speaking up–or drives the conclusion that we’re not now also fired up about the other unjust deaths. Maybe it was the only route that would jolt people like me into the realization that:

All lives, both inside and outside of our spiritual family, of whatever ethnicity, color, nationality, born, unborn, other identifier, matter. Because that is true, we can’t say to our Black sisters and brothers that we don’t need them. Furthermore, we need to give special care to this one part of Christ’s Body that is suffering and that has suffered for a long time. Because all lives matter, it matters that and how we care for this suffering part of our family.

How that plays out for each of us still remains to be seen, I suppose, but whether we’ve felt it or not, the whole Body has been suffering along with this one part this whole time. If we ignore “the cancer” in our society’s systems, it could even put an end to all our “mattering” lives. But if we “inconvenience” ourselves now, to repent and work toward healing, I have a feeling we (the Whole Church, all ethnicities, nations, colors) will experience a level of rejoicing we never knew was possible, and the rest of the world will see who Jesus really is, what Jesus really looks like, as His whole Body works together once more–or, maybe, for the first time.

3 thoughts on “One Part of the Body”