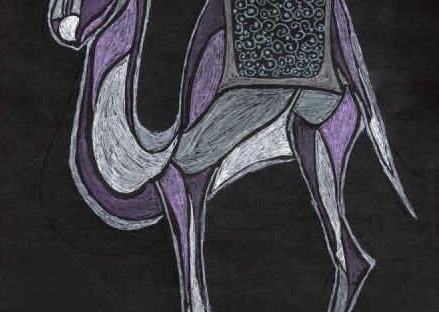 The camel logo has a story, you guys. But it’s only recently that I’ve realized it means more than I knew…

Once upon a time (what if I started all the blogposts with that, going forward? Would you still follow this blog?) I lived and worked as a missionary in London. I loved that time, but then I thought God was telling me to come back to the US, but not what to do next, so I came back to the US and floundered around for a while. The first thing I did was work at a living history museum for about six months.

After that I went to seminary, the first of three times–that time to get a Master’s degree in counseling. I don’t know whether the degree was a bad fit, the school was a bad fit, the state was a bad fit, or (what I suspect) the reverse culture-shock was so dreadful that none of the other things ever were going to fit at that moment in my existence. Regardless of the reasons, I lasted two semesters and in the middle of the second one, decided that the thing I really liked most to do in life was sit with people, drinking coffee and tea and talking about Jesus. So I decided I would do that as a profession, and create a coffee shop where that could happen, called the Pilgrimage. Then my flatmate and I had a party in which we put out art supplies for our guests to use. I can’t remember if they did, but that night I drew the camel you see all over Pilgrimage media–because I like camels and they are ancient modes of transportation and seem relevant to being nomadic (which I sort of felt I was at the time) and pilgrimages. That Christmas I made teeny tiny photocopies of the camel and put it on my Christmas cards, because Wise Men rode camels, obviously, and Epiphany and Christmas are close enough.

You may or may not know that the coffee shop never happened, though I did work at Starbucks for over five years. And then I pretty much didn’t think that much more about it, until my husband used the word “pilgrimage” relevant to my starting this online spiritual formation ministry here, and I was like, “Oh yeah. That name is perfect for this, too!” Which it is. And so is the camel.

But I only realised just how perfect the camel was this fall when I guest-preached on Mark 10:13-31. I’m still preaching sermons to myself out of that passage, so it’ll probably come up again here, but one of the most striking things in it to me is that camel. This is the passage in Mark where Jesus says that it’s more likely for a camel to go through the eye of a needle than for a rich person to enter the Kingdom of God. Some people like to say that Jesus was talking about some teeny gate in Jerusalem which a camel could enter if all of the luggage with which it was loaded down was removed. There may be or have been such a gate, but I don’t buy that that’s what Jesus was talking about because frankly, I think He got kind of a kick out of making really difficult-to-take utterances and meaning them, and also, His disciples totally freak out when He says it. Plus after they freak out (“Who, then, can be saved?”) He tells them “With man this is impossible.” I feel like He’s probably answering their question, which is more general than just asking about rich people.

If it helps me remember how totally dependent I am on God for everything, including and especially my own relationship with Him, I’m okay with being compared to a camel. Even an impossible one.