In that post I indicated that I have some experience with each of the four streams–but we can say that the one in which I originated, and with which I have the most experience, is, for better and for worse, the Evangelical Stream. This means that I will probably critique it here over time (assuming I ever manage to re-establish a blogging practice) more than the others–not because I don’t respect it, but because I know it better. Also, one of the four distinctives of Evangelicalism–and the one I most heartily embrace without feeling the need to qualify or re-describe my understanding of it in my own words, is the importance of the Bible. So, for the sake of irony, and because of a comment I received after the aforementioned post, let me redescribed that one in my own words.

An alert reader who comes from the same theological roots that I do (okay, it was my brother) quibbled a little bit with the term “bibliolatry” as featured in the graphic I shared in the earlier post, and am sharing again here: 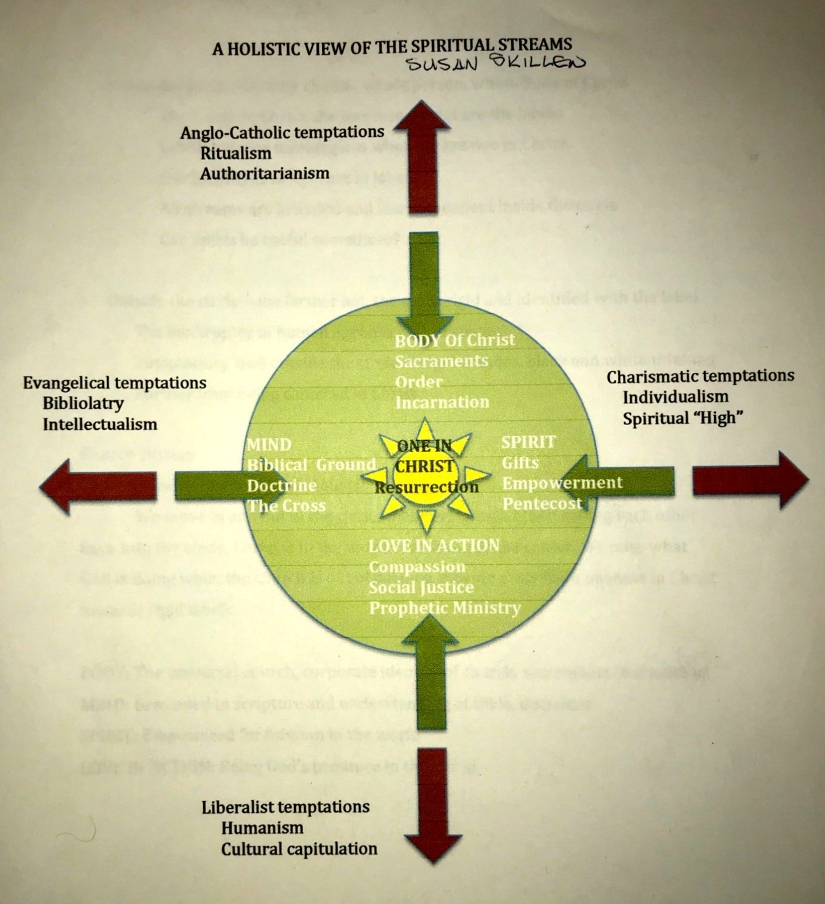 “I always wonder about the word ‘bibliolatry,'” said my brother, tactfully. “I don’t think people worship the Bible, but they might worship their group’s particular interpretation of it. And/or interpret parts of it literally that aren’t intended to be so interpreted. Even though we have human authors, I believe everything in the Bible God intended to be there. So, I don’t think the problem is typically valuing the Bible too much (over God), the way other -olatries are.”

Actually, I don’t wonder about the word “bibliolatry.” I really kind of hate it–because I think it’s a rather superiority-tinged accusation that isn’t even true. (That’s how much I love the concept behind the above graphic–enough to post it the first time without even disclaiming the “bibliolatry” bit.) The first time I heard the word, it was from the mouth of someone affiliating with another one of the above four Streams, and in my experience, that word does continue to be a charge only ever leveled by that one Stream, against the Evangelical Stream, unless it is from an Evangelical who is becoming disillusioned with Evangelicalism themselves. I was that person for a very little while once, when I first heard the word, so it resonated with me then, too. “Ah, hmm,” I thought. “Yes, the Bible isn’t God. There are a lot of people take what the Bible says and do really harmful things with it. Evangelicals really do idolize the Bible.”

As my brother indicated, though, Evangelicals really don’t idolize the Bible. I’m not sure it’s actually possible to idolize the Bible. I don’t believe it is possible to hold it too highly–as an expression in its entirety of God Himself–unless one were to imagine that it expressed God in His entirety. (There’s a difference. God encompasses the Bible, but the Bible can’t fully encompass God, although over time He can reveal through it to us all we need to “know” about Him for this life.)

However, it surely and absolutely is possible to idolize a Bible teacher, or that teacher’s interpretations, or the aspects of our surrounding culture or (ahem) politics that subconsciously influence how we read something. It is really possible, even with the Bible, to think we are paying attention and taking it seriously, when in fact the individual situation or broader cultural context are putting thick, distorted lenses over our ability to understand what’s really there. We can become very deeply invested in our own (or our favorite celebrity theologian’s or even television personality’s) understanding of things, without being equally humble and discerning at the same time. (Incidentally, the coiners of the word bibliolatry, being quite often ex-Evangelicals themselves, can fall into these same misunderstandings and -olatries, if from other perspectives.)

The unrealistic and even idolatrous elevating of what we happen to think about things occurs in more mundane life, too. For example, yesterday I was talking with this same brother (I only have one–unless you mean spiritually of course) and he was trying to tell me about something going on in his and his family’s life. I was trying to listen and I thought I understood what he was saying, but in reality, something going on in my own life had so overwhelmed my perspective on everything, that I understood pretty much the complete opposite of what he was trying to communicate and became quite ridiculously intense about it. We got it sorted out, but only after a lot of convoluted back and forth and his having to make an extra effort to repeat and restate what he actually meant so I could take on board both the meaning and what I was supposed to do with it.

Here’s the thing: The Bible is not a book of internet memes and inspiring sayings–and the famous “promises of God,” while there, are not always directed to us or don’t always mean what we think they mean/want them to mean–though people use it that way. It’s not a textbook, though people try to force it to be (and it is occasionally used as one in literature classes–but not, I think, in science classes, which is what I mean). It isn’t magic so that we suddenly understand it exactly and then become perfectly able to apply it to our lives. But it is the fully inspired written Word of God, and the truest physical expression of God we’ve ever had, second only to Jesus–who by the way is ALSO known as the Word of God. God gave it to us because He wants us not only to know about Him, or know what He wants from us or for us, but to know Him. And God gives us His Spirit–and His Spirit in each other–to help us understand it more and more over time, as we continue to humble ourselves before Him, and even before it, listening to–and for–His Word.